So I go through CF Pharmacy for all my medications but two. However, right now I am so fed up and frustrated with them. As many of you already know my numbers dropped at my last CF clinic and I just started a round of IV's through my new handy dandy port. 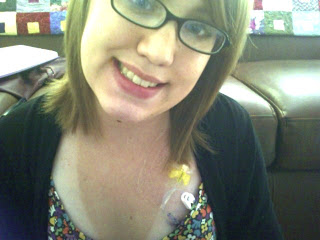 Well, almost two weeks ago I was feeling pill boxes and going through my medications I had at home and saw it was time to place an order. (I like to order a week or two early just in case of complications or delays so it will get to me before I run out.) Well funny story.... Like 5 DAY after I order the stuff I need I look at the status of the delivery because they had not shown up and it said processing still! I figured I would call after class but when I did call no answer. So the next day they call back saying a payment needs to be made before they can be sent out. So I call my mom, its taken care of no big deal BUT like 4 more days later they call again saying a bunch of the medications actually need refills. By this point I am panicking. I am about to run out of Xopenex, Hyper Sal and a few other things . I call my mom who calls the cf coordinator who says she will take care of it as soon as she gets their fax. She calls today saying she only got 2 of them and is going to call them but by this point I have no more hyper sal. So I am having a hard time breathing cause I am so gunky, That hyper sal makes me cough up alot in the mornings and without it I struggle. I have 2 days left of xopenex, no xyzal so my allergies are freaking out, and my zithromax is out.... I am so angry that this was not all taken care of as soon as I put the order in and not 2 freaking weeks later! Now tomorrow I have to call the doctor and ask if she has samples of stuff. I am on IV's to get better so I need to up the amount of treatments I am doing but how can I do that when I don't have the meds I need! I also have 2 HUGE tests coming up and I feel like poop without them. So it makes studying and concentrating that much harder.

UGH, I just wanna breathe. Is that to much to ask for??

Posted by Brianne Houston at 9:25 PM