Ports, Boogers, and Bronchs, Oh my!!

It has been a very busy week for me, probably one of the busiest and there are no signs of it slowing down until who knows when... winter break I guess! Lets start at the beginning. Thursday I took my little brother on a date to the movies but I get home to hear we have to leave right away to get test and pre-op stuff done for my port placement that following Friday that we had no idea bout until a couple hours ago. So we hurried to the hospital got my test done and 2 hours later we were at the other hospital up the street with family. Earlier that week my cousin Beth was in a car accident and on Thursday we were doing the final test to see if there was any blood in her brain which would declare her brain dead. So that whole week we spent with family at the hospital praying for the best. Sadly we got the worst of news my cousin Beth was no longer with us. I will have to fill you in on that later. It is still to hard for me to talk about. So after a night of no sleep I get up bright and early cause it is time for my PORT!! 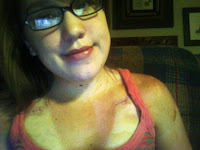 I don't think I have ever been so excited about a single surgery. For anyone who doesn't know I have the worst veins ever. My last 3 PICC's have been a pain. Two I was sedated for and the last one took 4 pokes to get in soooo it was time for a port! I thought it was gonna be easy just slip it in I wake up and bam done. Nope not at all! I was so sore and the stupid orange iodine dyed my skin and is still all orange. The nurse and I joked that I should tell everyone it was just a bad fake tan. After I got home and popped some pain pills the doctor gave me I was off to give my uncle and his family some dinner and visit to make sure things were okay. Then from there it was time for my cousin Ashtyn's baby shower! At UMC while waiting for beth's test results my aunt told me I better be there. She would even make a bed on the couch for me. Luckily I didn't need a bed. For the rest of the weekend the pain meds kept me pretty out of it. It still hurts a bit today but now I think it is just the surgical glue starting to come off.

Then on Monday it was time for another sinus surgery and a bronchoscopy to clean all the gunk in my sinus's and lungs! My doctor gave us pictures of all the gunk that was ooozing out of my sinus's but I will spear ya'll the trouble and not put it up. This one was alot harder then the port. I guess when I started waking up I didn't like the tube in my throat and threw up (thank goodness I have no recollection of that!!) then when I was moved to a lower down recovery my oxygen sats dropped to the 70's! The doctor thinks it was because my lungs were still soaking up water from the cleaning out. So after a couple hours and a few deep breathing exercises I was headed home. The worst part of all this is my lungs are tired and I can't blow my nose for a whole freaking weeeek!

I am so grateful for my doctors and all the medical advances they have had. I am just started this new medicine that came out called Cayston. So far I love it!! It gets me coughing pretty good for the 3 mins it runs but I feel like I can breathe deeper now. I do it three times a day and have to clean the nebulizer after every time but so far I think it is worth it. Until we find a cure I am willing to do anything! I see the doctor to hear about what he cultured during my bronch and see how my numbers are on the 18th then I am back off to Reno to move into my apartment!! I had 2 boring months of summer to get everything squeezed into this last month! Guess it was time to kick my lazy butt into gear. 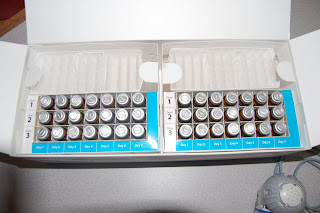 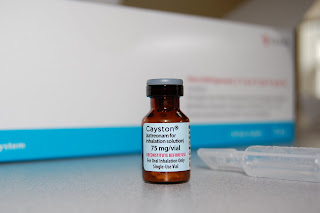 Posted by Brianne Houston at 6:31 PM